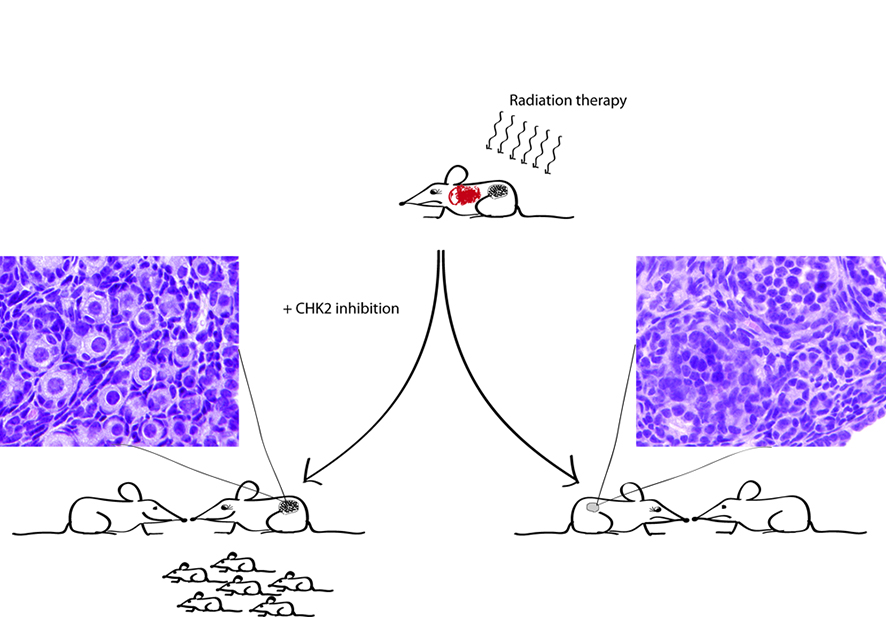 In a paper published in Science, John Schimenti, Ph.D., and colleagues from Cornell University show that DNA damage during meiosis triggers CHK2, which activates both p53 and p63, thereby inducing apoptosis.  Double strand breaks (DSBs) are a normal part of meiosis in oogenesis.  Checkpoints in the cell cycle sense the presence of DSBs or other DNA damage, and if the damage is not repaired, induce apoptosis to eliminate defective cells.  While the checkpoint pathways in mitotic cells are well-characterized, the mechanisms sensing DNA damage in meiotic cells are not.  Using a number of knockout mouse lines, Dr. Schimenti’s group now report that CHK2 is a component of the DSB-sensing checkpoint in both developing oocytes and the "resting" pool of oocytes in adults.  Inactivation of the Chk2 gene allowed rescue of oocytes otherwise destined for apoptosis due to unrepaired DSBs.  Remarkably, these oocytes appeared fully functional, with the ability to produce healthy offspring lacking evidence of DSBs.  This implies that if the oocytes can get past the initial checkpoint, eventually the DSBs are repaired.  Further elucidation of the DNA damage response indicates that rather than the canonical activation of CHK2 by ATM, during meiosis in oocytes CHK2 is activated by ATR.  Chemotherapy and radiation treatments for cancer cause DNA mutations and can cause premature ovarian failure in women.  These results provide a ray of hope for such patients, as chemical inhibitors of CHK2 might rescue the ovarian failure.