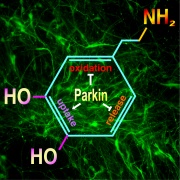 Jian Feng, Ph.D., at the University at Buffalo, reports the generation of live human neurons from skin cells of patients with inherited Parkinson’s Disease (PD). Dr. Feng and his colleagues collected skin cells from four subjects, two healthy controls and two PD patients with inherited mutations in the Parkin gene. Mutations in Parkin account for a small subset of PD patients, but the mutation allows scientists to understand the molecular and genetic underpinnings of the disease. Parkin controls the release of dopamine, a neurotransmitter in the brain. They reprogrammed the skin cells into induced pluripotent stem cells (iPSCs) and instructed the iPSCs to differentiate into the specific midbrain dopaminergic neurons that are affected by PD. When Parkin is mutated, neurons release extra dopamine, and reuptake of dopamine is decreased, leading to increased oxidative stress on the neurons and eventually to their death. This study provides potential new targets for therapies to treat both the inherited and sporadic forms of PD. This work was supported by a NYSTEM award to Dr. Feng (contract #C024406).